LOS ANGELES, June 23, 2021 /PRNewswire/ — Today, the prestigious one-on-one breaking competition Red Bull BC One reveals the U.S. line-up for its 2021 season. The competition will shine a light on the thriving breaking communities across the U.S. with four regional qualifiers («City Cyphers») hosted in New York, Los Angeles, Boston, and Houston. Following these City Cyphers, sixteen of the nation’s top B-Boys and B-Girls will battle at the National Final in Orlando for a spot at the Red Bull BC One World Final and a chance to be crowned world champion. 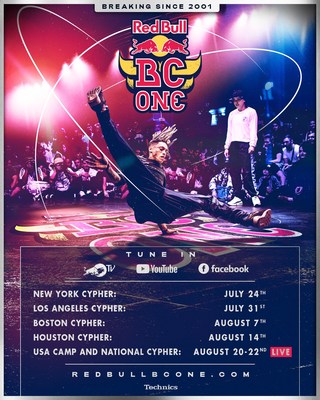 In celebration of breaking’s roots, Red Bull BC One kicks off in New York City, the birthplace of hip hop and breaking, on July 24th. City-specific stories throughout the month pay homage to the rich history and legendary figures who paved the way for today’s B-Boys and B-Girls at a unique moment in breaking’s trajectory with its recognition as an official competitive sport taking over international headlines.

Red Bull BC One All Star Neguin, who splits his time between New York and Brazil, emphasizes how this year’s event has a different energy: «Bringing Red Bull BC One back to New York City, the foundation of our culture, gives the community a chance to embrace the scene’s transformation while honoring the legacy of those who came before.»

Expanding on the past three years of hosting B-Girl cyphers, this year will feature a dedicated night for the final B-Girl battle, which audiences can watch live on Red Bull BC One YouTube, Facebook and Red Bull TV on August 21st. Logistx, the youngest member of the Red Bull BC One All Stars notes, «I’m excited that the increased female representation in breaking is reflected at every Red Bull BC One cypher in the US, all the way to the National Finals with a full 16 B-Girl bracket. It continues to affirm that B-Girls deserve to be highlighted in battles and can compete at a high-level just like B-Boys.»

Following regional cyphers, the legendary Red Bull BC One USA Camp will be hosted in Orlando commencing Friday, August 20th. Camp will feature three days of educational dance programming to provide a platform for the dance community to unite and celebrate. Breakers and dance enthusiasts alike are invited to take part in workshops, panels, and competitions led by world-class dancers as well as members of the elite Red Bull BC One All Stars: Logistx, Victor, RoxRite, Ronnie, Neguin, and more.

Camp will conclude with the Red Bull BC One National Final featuring a full day of B-Boy and B-Girl cyphers that will determine who will represent the U.S. at the World Final taking place in Gdańsk, Poland, on November 5 – 6.

RED BULL BC ONE U.S. SCHEDULE

Visit the website for detailed information on tickets and attendance details per stop. Due to the current landscape and to prioritize the health and safety of all involved, recommendations and requirements from state, county, local level government and health authorities will be enforced.

On Saturday, June 26th at 9AM PDT fans can tune into the Red Bull BC One E-Battle Final, the virtual rendition of the world’s biggest breaking competition, for a taste of the competition’s energy at https://www.redbull.com/int-en/events/bcone-ebattle/

ABOUT RED BULL BC ONE

Red Bull BC One is the biggest and most prestigious one-on-one breaking competition in the world. Every year, thousands of breakers compete for a chance to represent at the World Final. 16 b-boys and 16 b-girls earn the right to enter an all-out battle on the Red Bull BC One stage, but only one will be crowned the champion.

With 17 World Finals hosted in major cities around the world since 2004, Red Bull BC One has over 50 qualifier events and programs across 30 markets. For countries without an event, the Red Bull BC One E-battle gives anyone with an internet connection, anywhere in the world, a fighting chance to become their next country champion.

SOURCE Red Bull BC One