TORONTO, June 9, 2021 /CNW/ – The Globe and Mail has won this year’s CJF Jackman Award for Excellence in Journalism in the large-media category, announced today at the Canadian Journalism Foundation Awards virtual ceremony. 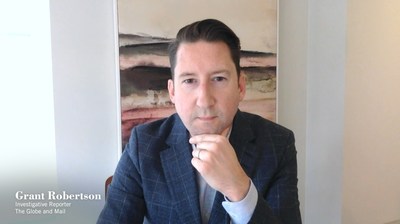 The Globe was honoured for its series investigating why Ottawa and the Public Health Agency were unable to respond effectively to the COVID-19 crisis despite Canada’s heavy investment in pandemic preparedness after the SARS outbreak. It is the Globe‘s fifth win in the award’s 25-year history.

"An excellently researched series," says Christopher Waddell, award jury chair and professor emeritus of the School of Journalism and Communication at Carleton University. "It clearly explains why Canada was not prepared for the pandemic after a decade of cutbacks to public health spending, including the 2019 decision to shut down Canada’s Global Public Health Intelligence Network—the result of replacing scientists with bureaucrats as overseers of public health."

Named after CJF founder Eric Jackman, this annual award honours news organizations, large and small, that embody exemplary journalism and have a profound and positive impact on the communities they serve.

In the small-media category, The Narwhal, an online non-profit magazine based in Victoria, BC, won for its groundbreaking reporting based on freedom-of-information requests about the beleaguered Site C dam, the most expensive public project in BC’s history.

The following previously announced winners were recognized at the annual event for the following awards:

André Picard, health reporter and columnist with The Globe and Mail, and Dr. Sanjay Gupta, chief medical correspondent for CNN, were honoured with the CJF Tribute, in recognition of their exceptional impact on the national and international stages in providing accurate and vital information amid the uncertainty of the fast-moving global COVID-19 pandemic.

This year’s virtual ceremony was hosted by Eric McCormack, the award-winning actor best known for his role on the NBC comedy Will & Grace, with awards presented by Ginella Massa, host of Canada Tonight with Ginella Massa on the CBC News Network.

Cision is the exclusive distribution partner of the CJF.

About The Canadian Journalism Foundation
Established in 1990, The Canadian Journalism Foundation promotes, celebrates and facilitates excellence in journalism. The foundation runs a prestigious annual awards and fellowships program featuring an industry gala where news leaders, journalists and corporate Canada gather to celebrate outstanding journalistic achievement and the value of professional journalism. Through monthly J-Talks, a public speakers’ series, the CJF facilitates dialogue among journalists, business people, academics and students about the role of the media in Canadian society and the ongoing challenges for media in the digital era. The foundation also fosters opportunities for journalism education, training and research.