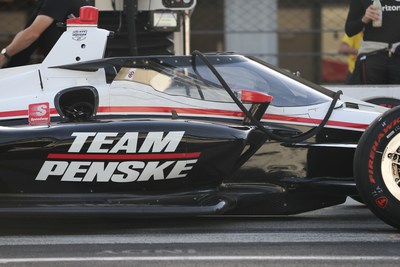 LAS VEGAS, June 5, 2020 /PRNewswire/ — Aeroscreen, safety innovation for enhanced driver cockpit protection makes its debut on Saturday June 6, 2020 during the GENESYS 300 taking place at the Texas Motor Speedway in Fort Worth, TX, the race will be televised on NBC starting at 7 p.m. (CT)

«This collaborative effort on the Aeroscreen truly exhibits an unrelenting commitment and passion for enhancing driver safety. We would like to thank everyone at Red Bull Advanced Technologies for creating a design that will be significant in the evolution of motorsports safety not only for the NTT INDYCAR SERIES but from a global perspective,» said Jay Frye, INDYCAR President.

The safety feature is a ballistic, canopy-like windscreen anchored by a titanium framework encompassing the cockpit and features Racing Optics tearoffs specifically fit for each team’s vehicles.

INDYCAR has mandated its use by all teams at all track disciplines (ovals, permanent road courses and temporary street circuits). The technology innovation is designed to reduce the risk of injury from flying debris or other objects striking the cockpit.

The laminated polycarbonate screen includes an anti-reflective coating on the interior of the screen, an integrated anti-fogging heating element, and has tear-offs produced by Racing Optics. Bart Wilson president of Racing Optics said: «I am proud to continue the family legacy of working with INDYCAR for the past 20 plus years.»

The Wilsons have deep motorsports roots, going back to the 1940s when Dempsey Wilson, Bart’s father, began building and racing roadsters. Dempsey progressed to compete in the Indy 500, alongside many of the greats like AJ Foyt and Parnelli Jones.

About Racing Optics
Racing Optics, Inc. is a family-owned business founded in southern California in 1999 by Bart, Steve, and Seth Wilson. Currently located in Las Vegas, Nevada, the company has continued to build upon the legacy of the Wilson family in racing.

Racing Optics multi-layer laminated-tearoffs have become a fixture in professional and competitive racing alike, championed by legends like Tony Stewart, Ricky Carmichael, and countless other winners.

About INDYCAR
INDYCAR is the Indianapolis-based governing body for North America’s premier open-wheel auto racing series known as the NTT INDYCAR SERIES. The series features an international field of the world’s most versatile drivers – including five-time series champion Scott Dixon, reigning series champion Josef Newgarden and defending Indianapolis 500 winner Simon Pagenaud – who compete on superspeedways, short ovals, street circuits and permanent road courses. The season, which runs from June to October, currently consists of 14 races in the United States and is highlighted by the historic Indianapolis 500 presented by Gainbridge, which is annually run in May, but rescheduled for August at the Indianapolis Motor Speedway. The NTT INDYCAR SERIES, the Indianapolis Motor Speedway and IMS Productions are owned by Penske Corporation, a global transportation, automotive and motorsports leader. For more information on INDYCAR and the NTT INDYCAR SERIES, please visit www.indycar.com.

About Red Bull Advanced Technologies
Drawing on the rich experience gained through competing in the world’s fastest development cycle, we aim to channel our expertise to deliver effective solutions for your projects with speed, precision and a built-in passion for achievement. Challenging convention is in our DNA.