ST. LOUIS, June 3, 2021 /PRNewswire/ — The World Chess Hall of Fame (WCHOF), the leading chess cultural center in the country, announces two, all-new exhibitions – Pawns & Passports: Chess Sets from Around the Globe and Check, Please! Chess Dining & Decor— showcasing how the timeless game has been influenced by people and cultures, along with its aesthetic impact on food and drink. In addition, WCHOF continues its popular exhibition Masterminds: Chess Prodigies, currently on view that focuses on real-life chess prodigies as well as inspiring fiction such as The Queen’s Gambit. 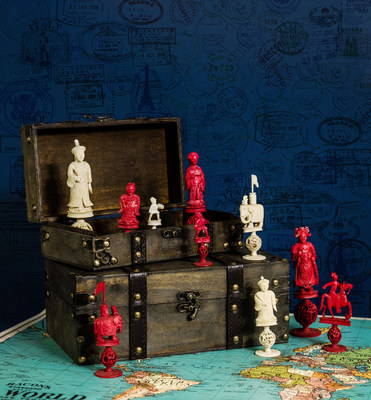 Pawns & Passports: Chess Sets from Around the Globe features chess sets from more than 30 countries, demonstrating how people from different regions have transformed the pieces to reflect their culture and history. Visitors will discover the stories behind the WCHOF’s diverse collection and learn how chess has captured the imagination of people around the world.

Highlights from Pawns & Passports include a Makonde carved wood chess set, featuring elegant, elongated pieces; a mid-20th-century Japanese chess set, featuring an emperor and his court carved in intricate detail; and a Hungarian silver and copper enamel chess set and board, which features inset jade and amethyst.

«After more than a year of travel restrictions due to the pandemic, we wanted to give viewers an opportunity to take a trip around the globe,» said WCHOF’s Emily Allred, curator of the exhibition. «From beautiful decorative antique chess sets made from luxury materials to intricately carved chess sets celebrating the culture of different regions, the exhibition demonstrates how chess has captured the imagination of people around the world.»

Check, Please! Chess Dining & Decor highlights more than 150 artifacts including food and drink-themed chess sets, chess-inspired tableware, utensils and decor from the collection of the WCHOF. Guests can explore immersive environments, including a chess-themed bar and diner, that display artifacts as they were originally intended to be used.

Check, Please! highlights include a newly acquired 3D-printed breakfast-themed chess set, photography of Russian grandmaster Boris Spassky eating watermelon during a break in a tennis game in 1972 before losing to Grandmaster Bobby Fischer in the World Chess Championship, a fish and poultry themed chess set cleverly called Checkmeat and several vintage barware and glassware sets from the 1950s and 1960s.

«Food, like the game of chess, brings people together,» says Shannon Bailey, chief curator at the WCHOF. «Moving away from a traditional museum method of displaying objects, the artifacts in this exhibition will be displayed in four immersive environments including a bar, a diner, a home area, and a fine dining restaurant, where visitors will get to see a variety of objects used as fun props as well as chess sets related to each theme.»

Masterminds: Chess Prodigies is an exhibition that tells the stories of notable chess phenoms including the iconic Bobby Fischer, World Chess Champion Magnus Carlsen and the legendary Polgar sisters. Through photographs, videos and mementos of important chess matches and tournaments from the collection of the WCHOF, visitors will learn more about these talented young players as well as their later accomplishments. The exhibition will also highlight the achievements of players who took up the game later in life and still made a mark on the world of chess.

More than 80 artifacts are on display, including a chess instructional book once belonging to and inscribed by Fischer as a youth, Carlsen’s prestigious 2013 World Chess Championship trophy, and Carlsen’s amber chess set that once belonged to former world chess champion Mikhail Tal.

«Unlike many other fields, in chess, kids can sometimes compete with—and defeat—adults,» explains Allred. «Whether we’re exploring the real-life story of Tanitoluwa (Tani) Adewumi, an eight-year-old Nigerian refugee who won the K-3 New York State Championship only a year after beginning to play the game, or fictional chess prodigy Beth Harmon from The Queen’s Gambit, the genius behind these chess prodigies is truly awe-inspiring.»

Pawns & Passports and Check, Please! will be on view through January 30, 2022, while Masterminds: Chess Prodigies will end on November 7, 2021. For those unable to travel to Saint Louis, virtual tours of all exhibitions are available. To learn more about the exhibitions, visit www.worldchesshof.org.

About the World Chess Hall of Fame
The World Chess Hall of Fame (WCHOF) is a 501(c)(3) nonprofit organization committed to building awareness of the cultural and artistic significance of chess. It opened on September 9, 2011, in the Central West End after moving from previous locations in New York, Washington, D.C., and Miami. Housed in a historic 15,900 square-foot residence-turned-business in Saint Louis’ Central West End neighborhood, the WCHOF features World Chess Hall of Fame inductees, United States Chess Hall of Fame inductees selected by the U.S. Chess Trust, artifacts from the permanent collection and exhibitions highlighting the great players, historic games and rich cultural history of chess. The WCHOF partners with the Saint Louis Chess Club to provide innovative programming and outreach to local, national and international audiences. For more information, visit worldchesshof.org.