Following the release of The Battle Cats version 10.6.0 on June 28th, 2021, a selection menu will appear upon app launch, offering players new choices for their preferred language in which to enjoy all the weirdly cute action of The Battle Cats. Crazy cat strategy is now more accessible for even more players around the world. 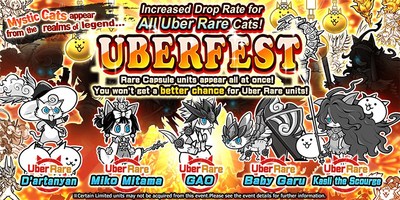 These new language options will be available just as the Summer Sunfest campaign appears July 2nd (11:00AM) through July 16th (10:59AM). Battle Cats players across the globe can enjoy daily gifts of 20 Cat Food, alongside limited events including:

– Cat Ticket Festivals: Earn ticket rewards to power up Cats and Abilities at the Cat Ticket Chance, Siege of Hippoe and Facing Danger maps each day.

The Uberfest event also returns to the Battle Cats Rare Capsules between July 2nd (11:00AM) and July 5th (10:59AM), offering much higher drop rates for top-tier Uber grade Cats, including an exclusive hero series available only during this event. Plus, all players get a special half-off discount with their first single draw or 11-Capsule draw from the Rare Capsule machine after July 2nd (11:00AM).

Based in Kyoto, Japan, PONOS Corporation has been producing games since 1990, committed to exceeding the expectations of players of all ages with creative, quirky concepts built upon solid gameplay foundations. PONOS is now focused on mobile app development and publishing, with flagship title The Battle Cats having gained over 60 million downloads worldwide.

ABOUT THE BATTLE CATS