LONDON, June 4, 2021 /PRNewswire/ — Japan House London opens Tokyo 1964: Designing Tomorrow, on 5 August 2021 to explore the revolutionary cultural and design legacy behind the historic Tokyo 1964 Olympic Games. The exhibition shares stories and artefacts never seen before in the UK and runs until 7 November 2021. 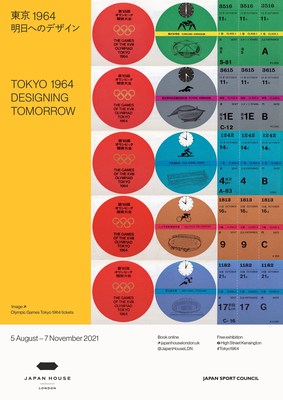 The 1964 Games were Japan’s first, large-scale engagement with the world after the Second World War. They presented a chance to tell a fresh story and showcase Japanese creativity and design thinking across the globe, an opportunity elevated by the 1964 Games being the first to be broadcast in colour on TV to a world-wide audience via satellite.

Japan’s hosting of the Games coincided with the country’s emergence as a global leader in technological innovation. Winning the bid to host the Games increased Japan’s newfound sense of confidence and creativity epitomized by innovations such as the high speed Tōkaidō Shinkansen, or ‘bullet train’, and elevated super-highways that dramatically transformed the urban landscape with ‘space age’ design through to Seiko’s 1,278 state-of-the-art timing devices that performed precisely without errors.

This optimistic and creative environment challenged and enabled Japanese architects and designers working on the 1964 Games to develop some of the most radical architectural and graphic design that has ever been created.

These designs still resonate and influence today, including:

Exhibits on display include:

The majority of objects in the exhibition are generously loaned from the Prince Chichibu Memorial Sports Museum & Library in Japan – many of which will be displayed for the first time in the UK.

Kawamura Hiroyuki, Director, Prince Chichibu Memorial Sports Museum, said: «I am very pleased that we have this opportunity to share our collection in the UK in partnership with Japan House London. Please enjoy our major exhibits including the original posters designed by Kamekura Yūsaku and the models of Yoyogi National Gymnasium designed by Tange Kenzō.»

Simon Wright, Director of Programming, Japan House London said: «This exhibition shows how the design project for the Tokyo 1964 Olympic Games, the first to be held in Asia, was revolutionary in creating a unified language by which to communicate the Games. It became the blueprint for subsequent major international sporting events. It illustrates Japan’s powerful emergence on the world stage after the dark years of the Second World War and how this Japanese design vision has influenced, and still influences, so much of what is now.»

A dedicated programme of events accompanies the exhibition including a look at the remarkable volleyball win by the ‘Witches of the Orient’.

Contributions to this exhibition, in the form of additional loaned items, have also come from The Seiko Museum Ginza in Japan and Central Japan Railway Company and the National Paralympic Heritage Trust in the UK.

Full public information including Covid compliance and safety information can be found at: www.japanhouselondon.uk

About the Prince Chichibu Memorial Sports Museum
The Prince Chichibu Memorial Sports Museum is the only integrated sports museum in Japan. In honour of Yasuhito, Prince Chichibu, who is affectionately known to the nation as the ‘Sporting Prince’ and his contribution to sports, it was established in January 1959 in the grounds of Yoyogi National Gymnasium, the main stadium for the historic Tokyo 1964 Olympic Games. Since then, for over 50 years, it has been collecting, archiving and sharing various sporting materials in order to preserve and spread the history of Japanese sports and culture. The adjoining library has variety of books and magazines about sports and is popular among sports fans and researchers.

About Japan House London
Japan House London is a cultural destination offering visitors the opportunity to experience of the best and latest from Japan. Located on London’s Kensington High Street, the experience is an authentic encounter with Japan, engaging and surprising even the most knowledgeable guests. Presenting the very best of Japanese art, design, gastronomy, innovation, and technology, it deepens the visitor’s appreciation of all that Japan has to offer. Part of a global initiative led by the Japanese Ministry of Foreign Affairs, there are two other Japan Houses, one in Los Angeles and the other in São Paulo.