LANSING, Mich., May 24, 2021 /PRNewswire/ — On Monday, May 17th, the family of Horace Peterson launched a mobile billboard campaign outside of the Michigan State Capitol building calling for Gov. Gretchen Whitmer to allow his early release. Horace’s grandson, Eric Woodyard, and his only daughter, Onquette Woodyard, were on site to see the launch and speak with reporters about their campaign for Horace’s freedom. Horace Peterson is from Flint, MI, and has been wrongly incarcerated for 48 years after being convicted of felony first-degree murder — and life in prison — for a crime he didn’t commit. 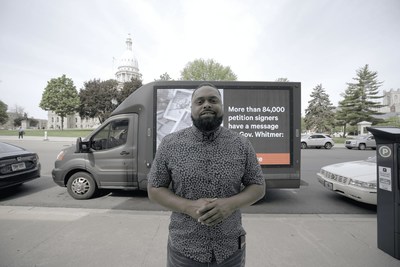 Over 84,000 have signed Eric’s Change.org petition calling for Horace Peterson’s early release, and the family hopes the campaign launch will draw Gov. Whitner’s attention to his cause. The mobile billboard was parked outside of the Michigan State Capitol building from 8am to 4pm starting Monday 5/17 through 5/21, and was part of a larger media campaign which includes digital and social ads urging the public to call Gov. Whitmer at CallForHorace.com and advocate for Peterson’s release.

Orquette wants Gov. Whitmer to take action.»The reason why I voted for her was because she was all about prison reform. My message to her would be stand on your word,» said Onquette Woodyard, Horace’s only daughter to WLNS News at Monday’s launch. Peterson’s daughter was 3 years-old when he was sentenced. She’s now 51.

«It’s keeping hope alive for him, and he’s holding his head up high. He’s been strong, he’s been a soldier the whole time. He just knows he has family supporting him,» said Eric Woodyard, Horace’s grandson, on what’s next for the family. «He’s already missed out on a couple generations, he has great-grandchildren out here and we don’t want him to miss out on that,» and added, «As long as I’m living and breathing. I’m going to keep speaking up for him and fighting for him.»

Video from the mobile billboard and photos of Peterson and his family are available for media use:
MOBILE BILLBOARD VIDEO + PHOTOS: https://change.box.com/s/hejwl5tby4s8a1yb109zhgivq8vonscn
EVENT PHOTOS: https://www.dropbox.com/sh/qzy77fiqu2rsrkv/AADnAb4RuKP6VQXMjsxzTiEga?dl=0

Please contact Amanda Mustafic at amustafic@change.org for any questions about the petition or for information about the video and digital assets.