LOS ANGELES, June 14, 2021 /PRNewswire/ — Today Angel City Football Club (ACFC) announced Jane Walker, a symbol of the Johnnie Walker brand’s commitment to progress in gender equality, as the team’s founding and exclusive spirits partner. This partnership is a first for Jane Walker in sports and marks the brand’s ongoing commitment to women who have pushed boundaries and blazed trails to achieve monumental firsts in culture.


Johnnie Walker has a longstanding commitment to gender equality and most recently through its Jane Walker initiative, launched the First Women campaign celebrating bold, brave women who broke barriers to be a first in their field, and to inspire and enable others on the road to a monumental first. In honor of the partnership, ACFC will be producing a Jane Walker content series that showcases the incredible firsts the team has achieved to-date, including being the first National Women’s Soccer League team in Los Angeles and the first majority women-founded, owned and operated pro-sports team, and toast to the many firsts to come. Come Spring 2022 when the team takes to the pitch as part of the National Women’s Soccer League, adult fans will also be able to celebrate responsibly at the stadium with custom Jane Walker and Johnnie Walker gameday cocktails and take part in other exciting activations to be announced.

«This team has already created so many firsts for women in sports that are making headlines and enabling people to rethink the approach to ownership, partnership, and more. Jane Walker by Johnnie Walker is proud to sign on as ACFC’s official spirits partner so we can celebrate their many achievements and help fuel and ignite everything they hope to achieve in the future. We are thrilled to join them on this journey and continue to mark these moments together for their incredible LA fan base and beyond,» Sophie Kelly, SVP of Whiskies, Diageo North America.

«Angel City is passionate about breaking down barriers and elevating women, and we are thrilled to welcome Jane Walker in this shared pursuit,» said Julie Uhrman, Founder and President of ACFC. «This announcement is only the beginning of many firsts for the team that we plan to celebrate together, and we can’t wait to bring this incredible partnership to life!»

Through the Angel City Sponsorship Model, Jane Walker and ACFC will collaborate to re-allocate a portion of the value of their sponsorship to help create more opportunities for women to achieve their goals. Together with ACFC, Jane Walker will continue its support of women-owned business funding marketplace, IFundWomen. The partnership will provide grant funding to Los Angeles based businesses identified in collaboration with ACFC and will be announced throughout the partnership, with the inaugural grant recipient given to MODEFYwear, an activewear company that allows women to embrace their heritage without making sacrifices. If you’re an entrepreneur looking for support, please apply at www.ifundwomen.com/JaneWalker.

ABOUT JOHNNIE WALKER
Johnnie Walker is the world’s number one Scotch Whisky brand, enjoyed by people in over 180 countries around the world. Since the time of its founder, John Walker, those who blend its whiskies have pursued flavor and quality above else.

Diageo is listed on both the New York Stock Exchange (DEO) and the London Stock Exchange (DGE) and our products are sold in more than 180 countries around the world. For more information about Diageo, our people, our brands, and performance, visit us at www.diageo.com. Visit Diageo’s global responsible drinking resource, www.DRINKiQ.com, for information, initiatives, and ways to share best practice. 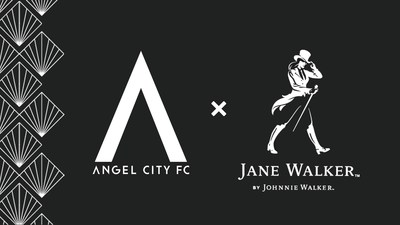