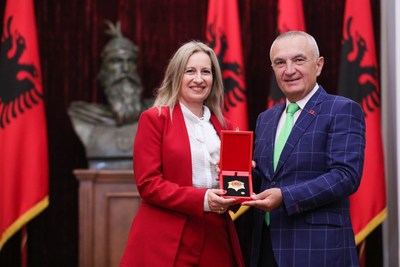 Leibovich is the first Israeli and first woman from the Middle East to receive the prestigious Albanian award. It is given to individuals who have contributed to Albania’s security, development, and prosperity.

«On behalf of the Albanian people, I am most grateful for Avital Leibovich’s contributions to enhancing the Albanian nation in the State of Israel and in the United States of America, and for standing out as a powerful voice in support of Albania and Kosovo,» said President Meta, who presented the award at the presidential palace.

Senior Albanian political and foreign affairs officials, as well as the Israeli ambassador to Albania, attended the ceremony. «Madame Leibovich has made an outstanding contribution to the forging of ties between the Albanian nation and the Israeli people,» said the president, and she «has particularly promoted the Albanian model of religious cooperation and tolerance as a model and instrument of global peace.»

Thanking the president for the award, Leibovich said, «The relationship between Albania and the Jewish people has existed for centuries. During World War II, Muslim Albanians saved many Jews. We cherish those brave acts, thank the Albanian people, and we, AJC and I personally, will continue to promote and develop the ties between Albania and Israel.»

Leibovich, who has headed AJC Jerusalem since 2014, has actively promoted relations between Israel and Albania. She has arranged dozens of meetings connecting Albanian, Israeli, and American officials, promoted agreements in various fields, including academia, culture, business, and diplomacy, and worked to bring the Albanian and Jewish communities closer.

Previous recipients of the Gjergj Kastrioti Scanderbeg Order knighthood include Hans Joachim Falenski of the German CDU/CSD party and Riccardo Migliori, former President of the Organization for Security and Co-operation in Europe (OSCE) Parliamentary Assembly.